“I want to sincerely thank Governor Tom Corbett and Lieutenant Governor Jim Cawley for their service to the Commonwealth of Pennsylvania.  Their leadership over the past four years has contributed to the creation of over 180,000 private sector jobs and the lowering of our unemployment rate to 5.7% - contributing mightily to the restarting of Pennsylvania’s economy.

“I thank Melanie Madeira, Doctor Moylan, Marcel Lisi, and Joe Albert for putting themselves forward as candidates for office and running strong campaigns.

“I would also like to congratulate Karen Boback – Lackawanna County’s newest Republican official – on her decisive victory tonight as well as Tom Marino on his successful campaign for Congress.

“Finally, I would like to thank all of the volunteers who worked tirelessly in support of the Republican Party and its candidates.”
Posted by LackawannaGOP at 11:28 PM No comments:

Do you need an absentee ballot?

Pennsylvania voters that cannot make it to the polls on Election Day can vote by mail via absentee ballot.  If you need an absentee ballot, follow these simple steps:


For more information on how to vote, click here.
Posted by LackawannaGOP at 3:31 PM No comments:

Posted by LackawannaGOP at 7:00 AM No comments:

The Friends of Melanie Madeira will be holding an event in Carbondale on 23 October:

Pizza and salad will be served, donations are appreciated.


Posted by LackawannaGOP at 6:00 AM No comments:

Albert for Senate Meet and Greet

Tickets are $10 per person, food and beverages will be available.

The Lackawanna County GOP 114th Legislative District will hold a Committee Meeting on:


Pizza and Pizza and Soda will be provided.

The purpose of this meeting will be to distribute election materials, Allow Candidates to speak for 5-10 minutes, organize door to door, phone calls and poll watchers etc., as well as conduct any other business that may come before the 114th Committee.

“FRIENDS OF JOE ALBERT” INVITES YOU!


TO A SPECIAL MEETING – RALLY – FUNDRAISER

Posted by LackawannaGOP at 3:43 PM No comments:

Posted by LackawannaGOP at 5:57 PM No comments:

For more information, please call 570-347-ANDY
Posted by LackawannaGOP at 9:00 AM No comments:

Happy Independence Day from the Republican Party of Lackawanna County.


Posted by LackawannaGOP at 9:00 AM No comments:

On Thursday, 17 July 2014, the Friends of Melanie Madeira committee will host a reception for Melanie.

For more information, please click the link below:
http://www.melanieforpa.com/contact_us
Posted by LackawannaGOP at 12:40 PM No comments: 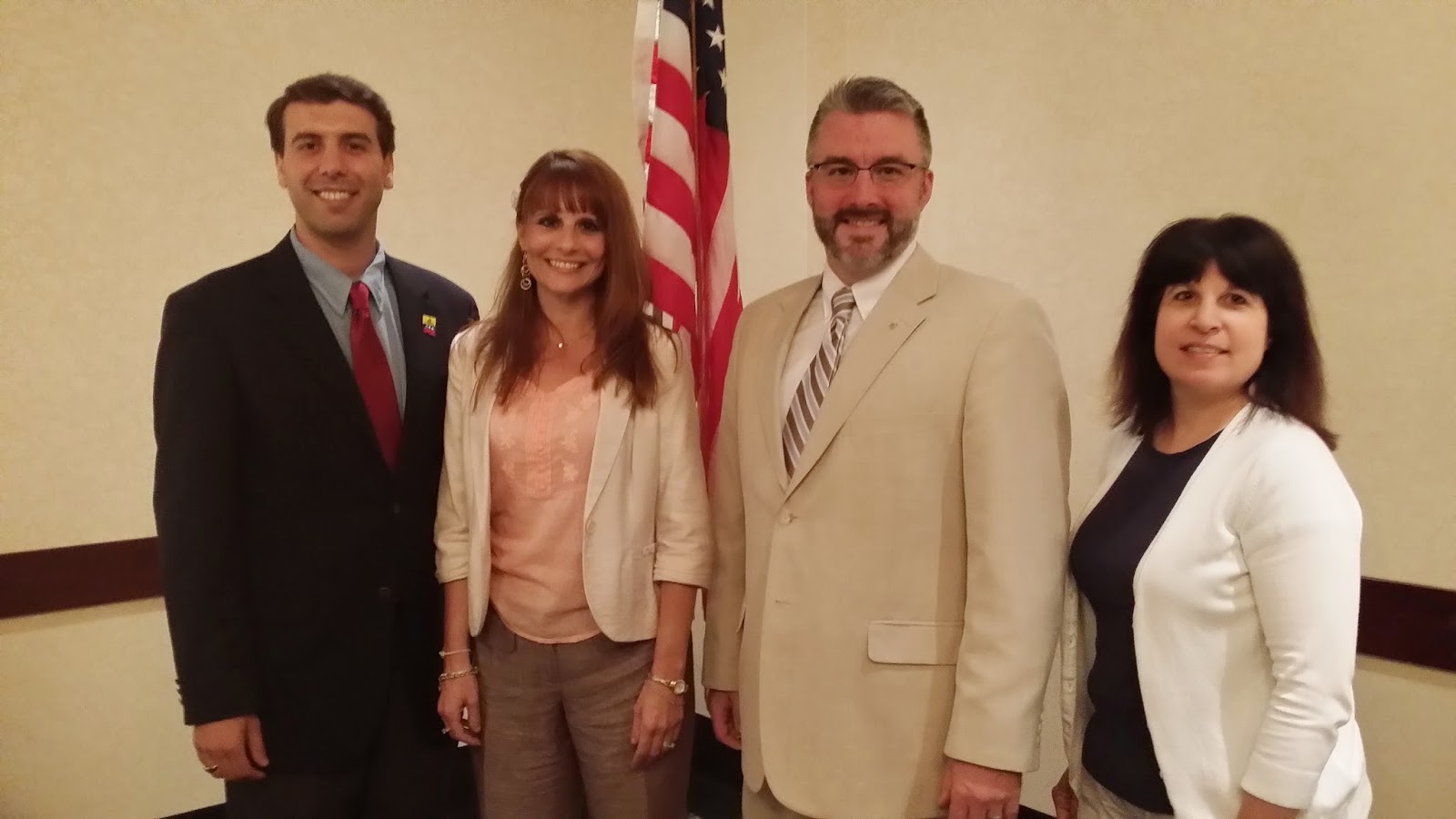 On Wednesday, 25 June 2014 the Republican Party of Lackawanna County assembled for the purpose of electing officers of the committee.  Committee persons elected at the 2014 Primary Election as well as the current members of the Executive Committee were entitled to cast a ballot in the election.

Chairman Stange issued the following statement:
"On behalf of the officers of the Republican Party of Lackawanna County I would like to thank the committee members for their hard work and dedication to the Republican Party.  Without their tireless efforts, none of our accomplishments over the past four years would have been possible.

"We would also like to express our sincere gratitude for the continued support and confidence in our leadership team demonstrated by tonight's vote.

"The Republican Party is united, organized, and ready to fight for the taxpayers of Lackawanna County."

Posted by LackawannaGOP at 12:32 PM No comments:

The Third District Republican Committee cordially invites you to:

Issues and Eggs is a groundbreaking breakfast event highlighting Republican candidates from Luzerne County and Lackawanna County. Candidates will take questions from a media panel in a fast-moving, moderated event.

Moderator: Tiffany Cloud Olson, active area Republican, television host, columnist and author of Sleeping with Dog Tags. Copies of her book will be available for purchase and signing by the author. Half of the proceeds will be donated by the author to The Rolling Angels for Armed Forces.

ISSUES AND EGGS is hosted by:

Can't attend? Consider sponsoring the event or making a contribution to support Issues and Eggs.

Seats will go quickly! Limited tickets will be available at the door, first-come/first-serve!
Posted by LackawannaGOP at 9:00 AM No comments:

The Slate Belt Republican Association and the City of Easton Republican Committee will host a debate between the Republican Candidates for Congress in the 17th Congressional District.  The candidates are Matthew Connolly, Matthew Dietz, and Dr. David Moylan.

A meet and greet with the debate audience will immediately follow the debate.

Proposed Topics:
Obamacare - what you can do to change
Federal Spending - bringing under control
Energy/Environment - closing of power plants in PA, coal regulations, Keystone pipeline, EPA water regulations
Taxation - how do we change the existing tax system under control of Congress.

To RSVP, kindly email debate17norco@gmail.com.
Posted by LackawannaGOP at 10:30 AM No comments:

Dietz for Congress Q & A Fundraiser

Posted by LackawannaGOP at 12:13 PM No comments:

MSCRW of Lackawanna County will hold a petition party on Sunday 3/9/2014 at Lucca's Restaurant Taylor Pa. 18517 from 5p-7p. A Notary will be on site for anyone who needs their petitions notarized. Coffee and desert will be provided free of charge. Anyone will be able to order from the menu, if desired, at their own expense.
Posted by LackawannaGOP at 6:17 PM No comments:

Today, February 6, 2014 marks the birth of Ronald Wilson Reagan, the 40th President of these United States.

As tribute, Ronald Reagan's address to the Young Americans for Freedom:

Posted by LackawannaGOP at 10:39 AM No comments:

Good morning and welcome to the latest Lackawanna GOP Update.

2013 In Review:
The Lackawanna GOP had another successful election in 2013.  We had almost 160 candidates on the ballot in 2013 and 85% of them won - and that doesn't count the write-in candidates.

You made that happen.  It is critical that we build on these local victories and use that momentum for our candidates this year.

Important Update on party offices:
At this year's Primary Election we will be electing both the District Committee positions as well as Republican State Committee members.

Reapportionment:
State House and State Senate reapportionment is in effect for the 2014 Elections.  Lackawanna County will now have five State House Districts.  If you know of anyone interested in seeking any of these offices, please notify us by emailing lackawannagop@gmail.com.  The new districts are as follows:

117th Legislative District
Part of LACKAWANNA County consisting of the TOWNSHIPS of Benton, La Plume and West Abington and the BOROUGH of Dalton; Part of LUZERNE County consisting of the TOWNSHIPS of Dallas, Fairmount, Franklin, Hunlock, Lake, Lehman and Ross and the BOROUGHS of Dallas and Harveys Lake and All of WYOMING County.
Total population: 60,829

118th Legislative District
Part of LACKAWANNA County consisting of the TOWNSHIPS of Clifton, Covington, Elmhurst, Jefferson, Madison, Roaring Brook, Spring Brook and Thornhurst and the BOROUGH of Moscow and Part of LUZERNE County consisting of the CITY of Pittston and the TOWNSHIPS of Bear Creek, Buck, Jenkins, Pittston and Plains and the BOROUGHS of Avoca, Bear Creek Village, Dupont, Duryea, Hughestown, Laflin, Penn Lake Park and Yatesville.
Total population: 61,984

Political Events:
We have now entered the 2014 Election season.  As always, we like to help promote political events throughout Lackawanna County.  Please send any political events that are happening in your area to lackawannagop@gmail.com.